As many are becoming aware, Eagle Springs is a golf gem, frozen in time. Exit the main road, and you’ve left the 21st century. In a minute, enter the 20th century and a few seconds later, the 19th. After being greeted by the hospitable staff as if you’ve been a friend of the family forever, there you are, on the teeing ground, creating your own “perfect work-of-art” sand tee. And, after driving the gutty ball over “The Blinder”, it’s 1893.

In only its second year, this premier gutty event has attracted contestants from seven states, or perhaps 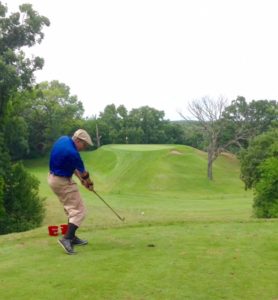 Greg Smith, Event Director, did a masterful job of setting up the course. Contestants were pleased with the creative variety: #1 played from the top of the hill as “Funnel” and as the original “Blinder”; #2 was played from a new hole, “Crater” as well as the iconic “Volcano”. A stellar three shotter, #8, played as “Twin Oaks” as well as “Under the Oaks”. Several tees were moved up so that contestants were challenged to choose “risk or reward”. It was observed that a “wee nip here” or a “wee nip there”, certainly aided in the decision-making!

On this weekend, our entire nation was gripped by a heat wave and Eagle Springs was no exception. But this was a hearty group and they enthusiastically embraced what Mother Nature had borne. Upon conclusion of Friday’s first round, contestants chilled in the historic clubhouse, exchanged pleasantries, sipped their favorite beverages and savored a fabulous grill prepared by “Top Chef” Doc Eike.

At the conclusion of Saturday’s final round, Steve Simer had claimed his second consecutive Open Championship with a steady pair of 75’s.

But this event wasn’t a tale about victors or losers. This event was all about the “Keeper of the Spirit”, Mr. Mike Just. During the Thursday practice round, the venerable Bill Reed had taken upon himself to escort Mike on a personal tour of the historic course. Both proclaimed it worthy to host a gutty championship venue.

Mike, accompanied by Lynn, were our honored guests and were ever-present throughout the event. Following the Saturday awards ceremony, our Wisconsin Hickory Golfers recognized Mike as the “Keeper of the Spirit” and presented him with a bronze hickory golfer trophy. Mike received a five-minute standing ovation. After the applause had quieted, Mike humbly thanked everyone from the bottom of his heart.

Indeed, Mike, it was truly our privilege.

We look forward to having you and everyone join us next year. Details will be available soon. We have already begun planning a unique option to play another nearby Wisconsin Classic Historic Course, New Berlin Hills, 1907.