The following are excerpts from a conversation with Bob Georgiade (North Carolina Hickory Golfer, Collector and Seller) regarding a set of MacGregor OA Irons he had for sale on ebay. I was not a successful bidder but saved his notes for reference.

The MacGregor OA irons are a very interesting and playable set of American made irons. They are perhaps the earliest production model wide flanged sole clubs made in the US. William Ballingall patented a flanged sole golf club in the UK in 1894. The concept was that the wide sole would slide under the ball without digging up the turf. Later on Maxwell also patented in the UK the concept of a wide flanged sole golf club in conjunction with reduced hosel weight (total weight of the head remained the same but the additional weight added in the wide flanged sole was offset by drilling holes in the hosel). These were great ideas but were not initially well received in the UK because playing on the predominantly links land golf courses did not require a club that reduced dig and promoted a higher ball flight. To the contrary, narrow soles worked better on the hard pan and a golfer wanted to keep the ball below the wind. Golf was a game played on the ground in the UK.

The predominant US golf courses were parkland courses and were much lusher with wetter ground and turf. Thus, the wide flanged sole irons began to gain a foothold in the US golf market. In the teens both MacGregor and Spalding/Wright&Ditson began offering flanged sole irons. The earliest flanged sole MacGregor OA models had J MacGregor Dayton, O stamped in the oval on the back which would date them before 1918. They had Accurate and an Arrow on the back above the OA. The face scoring was stag dot (dot and dash). These stampings continued for a number of years post 1918 when MacGregor switched over to simply MacGregor Dayton, O in the oval on the back. Around 1926 MacGregor removed the Accurate and Arrow from the backs of their OA model irons and replaced them with simply Popular. The face scoring also changed to dashes in the middle framed by vertical lines with dots between the lines. These Popular model OA iron appears to have lasted for only one or two years and gave way to the Popular flanged sole B Model irons which retained the later OA face scoring but had the iron numbers on the back along with the B designation and numbers on the sole.

While I do not have all of the old MacGregor catalogs the ones I do have show that there were only 5 clubs offered in the OA model; a Mid Iron, a Mashie, a Mashie Niblick, a Niblick and a Putter (picture attached). This 5 club set up was quite prevalent during this time period when the popularity of playing golf was exploding in the US. Manufacturers would also produce special order clubs upon request that were not sold in their catalogs. I have collected and traded clubs for around 35 years and have owned and seen many, many thousands of hickory shafted irons. I have seen and owned not only the following 5 MacGregor OA clubs but also a Driving Iron (have only seen 2 of these), a Mid Mashie (only seen two of these) and a Jigger (have seen several of these). The hard to find Mashie Niblick and the  scarce Driving Iron and Jigger are included with this set. The A 1 cleek, while not marked from the OA Model, is very similar. This is the only flanged sole MacGregor A Model I have seen. It is not listed in any of their catalogs where the A Model cleek is listed as a weighted back iron but no flanged sole. Probably another custom order that nicely compliments the OA Model irons and is definitely a hard to find club.

Over the years I have owned and measured numerous MacGregor OA irons. While there was no industry wide standard back then I am comfortable in saying that the standard lofts for the MacGregor OA clubs are those mentioned above for these individual irons (MacGregor also shows the loft as made in their catalog). . Notice that one of the Mashies in this set has a loft of only 28*. This was not in the range of the normal Mashie that MacGregor sold in their catalog. I did not bend this club and it could very well have been made this way by MacGregor at a customer’s request to fill a gap in their set. The 28* loft is the equivalent to many of the deep face Mashie Irons (not Mashies) that MacGregor and other manufacturers sold in their sets. The OA Mid Irons I have owned and measure fall into the 22*-24* range. The OA Mashie are usually 38*-40*, the Mashie Niblicks are 44*-46* and the Niblicks range from 48* to 52* loft. I do have several OA Mid Irons that are low lofted at 15* and they could very well have been a special custom order from MacGregor.

Here is a catalog image from the 1920’s. (exact year unknown) 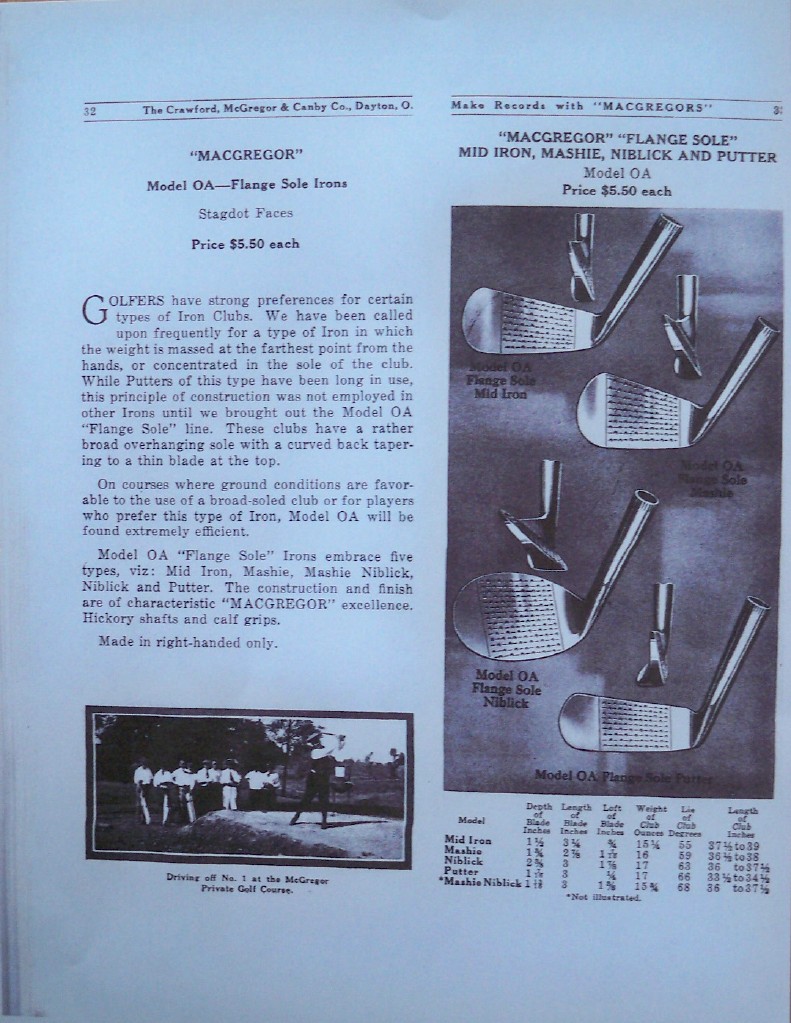 Here is a page from the 1927 MacGregor catalog showing the MacGregor Model B flanged sole irons. I have a 1928 catalog and they are not shown in there. I do not have a 1926 catalog so they may or may not have been offered then as well. I know they were offered for a very short period of time and you see a lot more OA models than B models. MacGregor would continue to sell all models they had on hand, even if they were not in their catalog, until they ran out of stock. 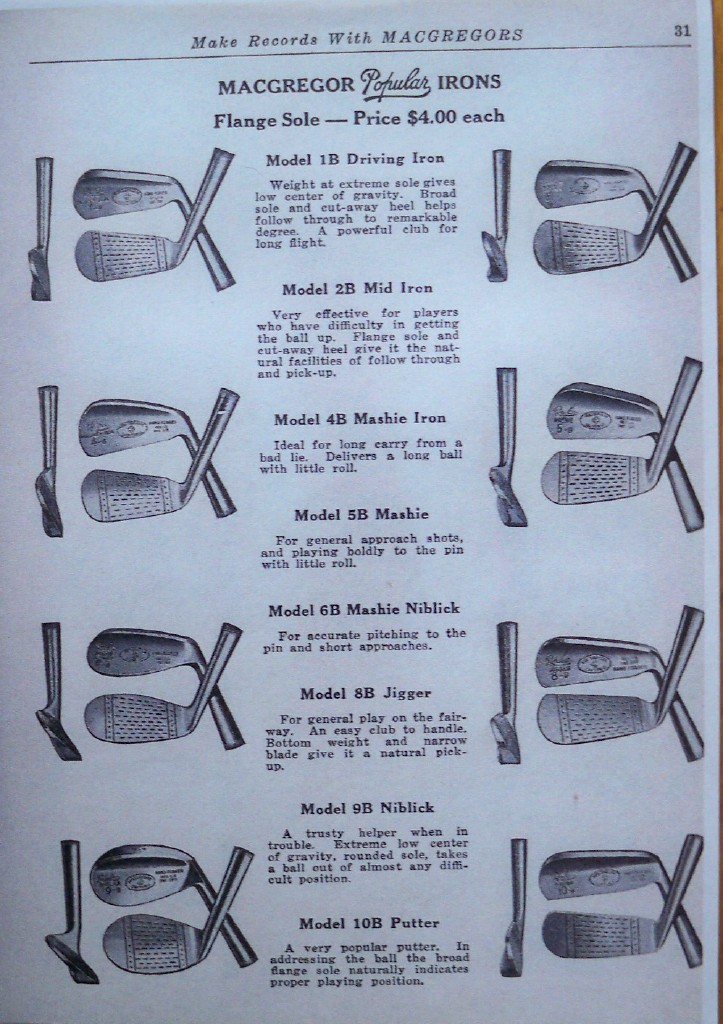